Great amigos from Canada, we had a very nice trip of 9 days.

The black spot along our journey was the huricane that affected part of CR´s north zone. Even when we had lots of rain whiile we were in Sarapiqui we still saw lots of birds and other animals.

The good spirit was all around us and we had a super good trip. 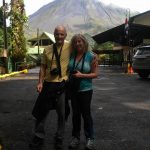 We costumized a short trip for Elizabeth and Michael Collins, two enthusiastic birders and nature lovers.

This time we stayed at Heliconias Lodge Tenorio Volcano and Observatory Lodge so we could end near San Jose on the last day. We had our last stop on highlands around Poas Volcano. The locations as planned gave us lots of tanagers, antbirds, motmots, Trogons, hummingbirds and some raptors

Best bird of the trip: The winner this time is Ocellated Antbird!! second place for Ornate Hawk-Eagle.

Michael and my self  we had a short but complete body view of this bird just a few meters away from us, I´m sorry Ilizabeth !!This bird came out at Tenorio Park. Also we had fantastic eye level views of Black capped Pygmy Tyrant in this park. Some very special birds to mention not only here but the rest of the trip: Rufous winged Tanager, Black and yellow Tanager, White throated Shrike-Tanager, Fiery throated Hummingbird, Black and yellow Silky-Flycatcher,Smoky brown Woodpecker, White Hawk, Dull mantled Antbird.

Great visit to local family for night walk near Heliconias Lodge, named Bijagua Ranas ( phone: 8435 9792) where we were guided by the family who showed us over 9 sps of frogs in their garden!! I loved the 3 year old kid who spot some of the frogs for us!! During the trip we had 5 species of mammals and including some beautiful snakes as Eye lashed Pit Viper and Fer de Lance. 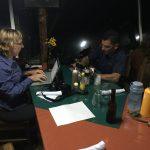 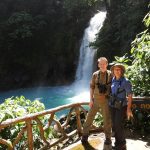 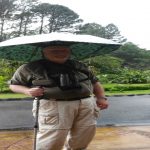 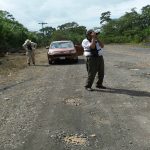